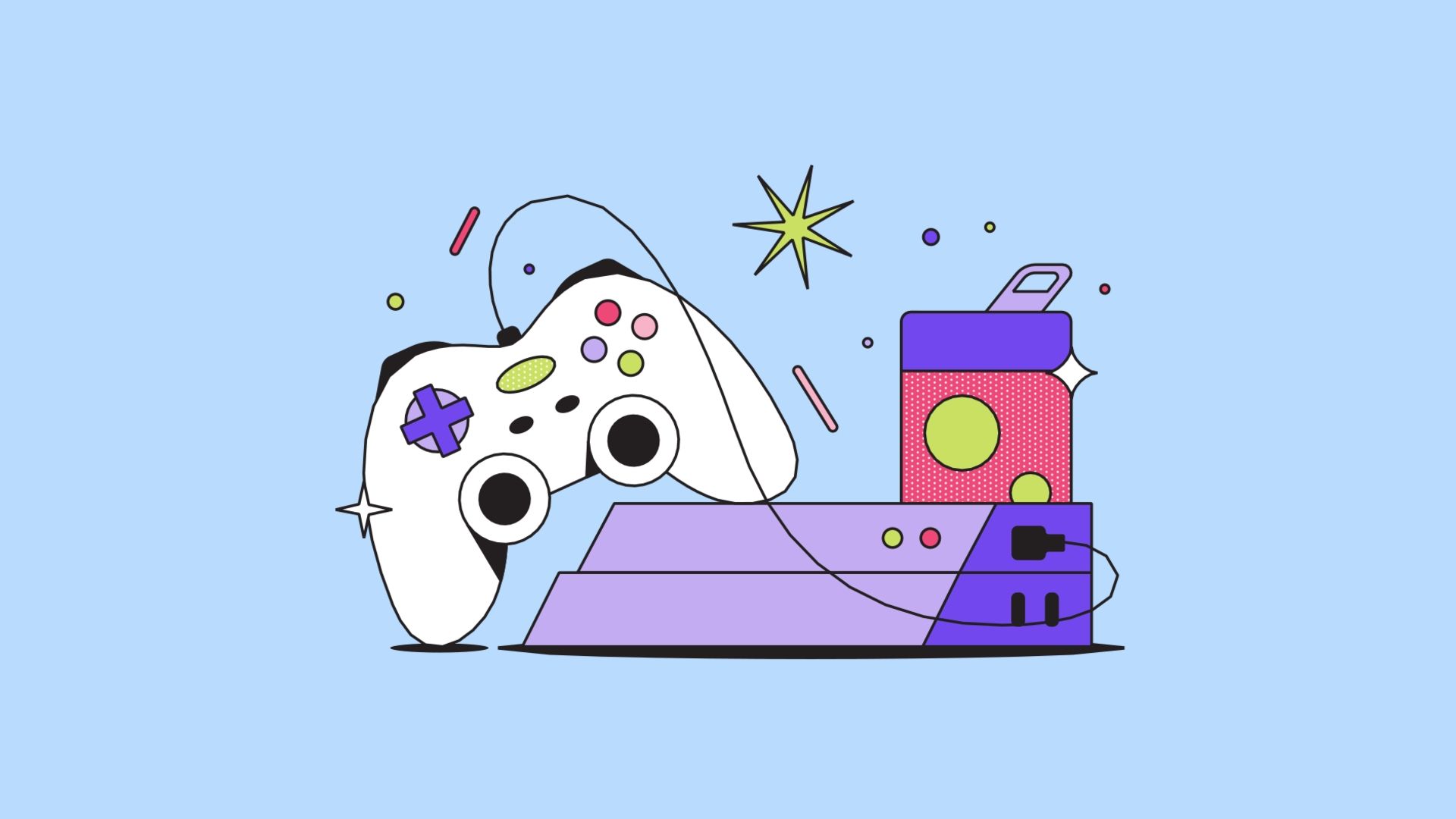 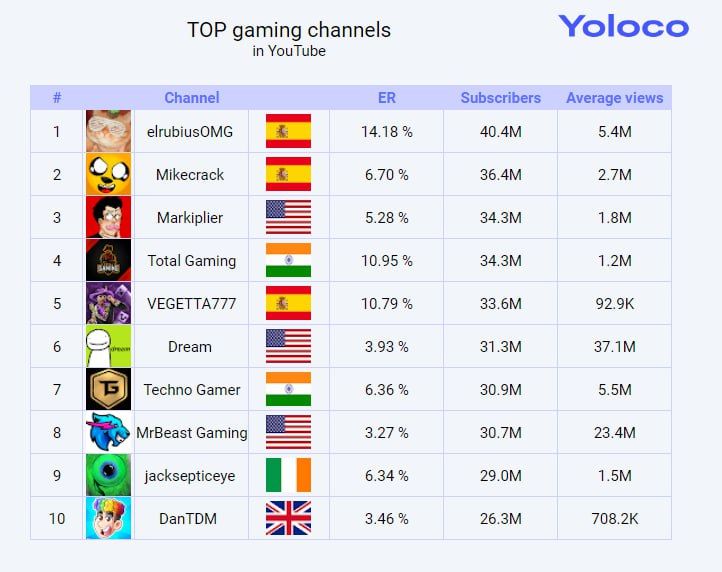 We used Yoloco to identify the most popular channels with the highest number of subscribers. We used engagement metrics to narrow down our list and considered the number of average views per video.

We hope this helps you identify the best YouTube gamers. Let's go.

ElrubiusOMG is a Spanish-language YouTube channel created by Rubén Doblas Gundersen. The channel has more than 40.4 million subscribers and has an engagement rate of 14.18%. ElrubiusOMG is a gaming channel and features videos about a variety of games including Minecraft, GTA 5 and other open world games. It also features videos about playing on video game consoles, playing with friends and other content related to gaming. The average video on this channel has 5.4 million views, which is a very low number compared to other popular YouTube channels. ElrubiusOMG is a great place to discover new games and join in on the fun.

What can be promoted? ElrubiusOMG is focused on video game content, so any type of game could be promoted on this channel. This includes console games, PC games, mobile games, virtual reality games, and more.

Mikecrack is a YouTube channel created by Mikecrack, a popular Spanish YouTuber. The channel has accumulated more than 36.4 million subscribers since its inception and is known for its humorous and entertaining content. Mikecrack produces a variety of videos including vlogs, comedy sketches, and gaming videos.

The channel has an impressive engagement rate of 6.70%, meaning that viewers are highly engaged with their content. However, the channel has an average of 2.7 million views per video, which is relatively low compared to other YouTubers.

The type of games that could be promoted by this channel could include platformers, puzzle games, action-adventure games, and strategy games.

Markiplier is a popular YouTube channel created by Mark Fischbach. The channel focuses on creating content related to gaming, comedy, and charity. It has more than 34.3 million subscribers and over 11.8 billion total views. Markiplier's content is entertaining and often comedic, and his videos have gained a great deal of popularity over the years.

The channel has an engagement rate of 5.28%, which is very high for a YouTube channel. This indicates that viewers are actively engaging with Markiplier's content, and it also suggests that his videos are consistently high-quality.

However, the channel has an average of 1.8 million views per video, which is comparatively low for its size. This indicates that Markiplier's content is not as popular as it could be, and it suggests that there is room for improvement.

TotalGaming093 is a popular YouTube channel with a massive 34.3M+ subscribers. It features gaming videos about popular mobile and console games, including Fortnite, Call of Duty, and more. This channel is highly engaging with a 10.95% engagement rate, allowing it to reach more viewers. However, the average video views are relatively low at 1.2M, indicating that the audience is highly engaged but might not be reaching as many people as the channel could

The YouTube channel specializes in promoting video games of all genres, including adventure, strategy, simulation, and role-playing games.

The channel is dedicated to producing gaming-related content, mainly focusing on Fortnite, GTA V, and Minecraft. Vegetta777 also uploads vlogs and other personal content. The channel has an engagement rate of 10.79%, which is very strong for a YouTube channel of this size.

Despite this impressive engagement rate, Vegetta777's average video views are at 92.9K, which is very low. This may be because of the recent algorithm changes, or because the channel is so popular that it has reached its peak.

This YouTube channel, @dream, is a content creator with an impressive following of over 31.3 million subscribers. It produces content that is highly engaging, with an average engagement rate of 3.93%. It also has an incredibly impressive average of 37.1 million views per video, which is an incredible result. The videos range from gaming to vlogging, so there is something for everyone. Expect to find videos on anything from gaming highlights to unboxing videos, and everything in between. The channel is constantly updated with new content, so make sure to check back regularly to see what's new.

The types of games that can be promoted by this channel would include games of all genres, such as role-playing, adventure, strategy, simulation, sports, and more. Additionally, the channel may also promote casual, mobile, and indie games.

Techno Gamerz is an amazing YouTube channel created by two brothers, Ashish and Akshay. It is a gaming channel that features the latest updates, news and reviews from the gaming world. It also offers tips and tricks to help gamers get the most out of their gaming experience. The channel has an engagement rate of 6.36%, more than 30.9M subscribers and an average of 5.5M views per video. It also provides video tutorials on game reviews, gaming updates, and other gaming related topics. It is the perfect channel for gamers to stay up to date with the gaming world.

The channel promotes video games of all genres, including adventure, racing, RPG, shooter, sports, and strategy.

MrBeastGaming is a YouTube channel run by Jimmy Donaldson, better known as MrBeast. On the channel, MrBeast uploads gaming content, ranging from playthroughs of popular video games to challenges and collaborations with other gaming creators. MrBeast also does sponsored videos with various brands. His channel is well-known for its high-energy, entertaining videos, and is a great place for gaming fans to be entertained and learn about the latest gaming news.

The channel has grown to become one of the most popular YouTube gaming channels, with over 30.7 million subscribers and an average of 23.4 million views per video. It also has an impressive engagement rate of 3.27%. MrBeastGaming is an excellent channel for gamers looking for high-quality and engaging content.

The types of games that can be promoted by this channel are PC, console, and mobile games.

Jacksepticeye is a YouTube channel hosted by Irish YouTuber, game commentator, and internet personality, Seán William McLoughlin. The channel focuses on video game playthroughs, comedy sketches, and vlogs. Since its launch in 2012, the channel has become one of the most popular on YouTube, with over 29 million subscribers and more than 7.7 billion video views. It is also one of the most engaging channels, with an engagement rate of 6.34%. Per video, the channel typically receives around 1.5 million views. Jacksepticeye’s content is often lighthearted and humorous, but with a serious undertone. His videos cover a wide range of topics, from gaming to philanthropy. He also often collaborates with other YouTubers, such as Markiplier, for gaming videos and charity events. Jacksepticeye is a great channel for those who enjoy gaming, comedy, and vlogs.

The YouTube channel can promote a variety of video games, including action-adventure, role-playing, open-world, and sandbox games. It can also promote puzzle, simulation, and strategy games.

DanTDM is one of the most popular YouTube channels, created by British gamer and entertainer Dan Middleton. The channel has over 26.3 million subscribers and has a 3.46% engagement rate. It features videos of Dan playing a variety of games, including Minecraft, Roblox, and Fortnite, as well as challenge videos, vlogs, and more. On average, each video on the channel has over 708.2K views, making it one of the most watched gaming channels on YouTube. With entertaining and engaging content, DanTDM is a great channel for gamers of all ages.

This YouTube channel could be used to promote a variety of video games, including adventure, RPG, strategy, shooter, and puzzle games.

Are you trying to make the perfect YouTube Shorts video, but can’t figure out the right size? Don't worry...

As YouTube expands its platform and increases its user base, it is introducing new features to better...

YouTube has just announced that they will be paying creators more money beginning in 2023 and, starting...